It’s not often I spend a whole weekend on the Taff, I like to mix it up a bit and fish the many productive rivers of south Wales. This weekend saw me head to the middle stretches of the Ospreys FFA water with a good friend Steffan Jones. But why travel anywhere when the fishing is on, right at your doorstep?

I headed down the river mid morning to arrive at around 11am, hopefully then arrive, set up and maybe even spot a few rising fish before the initial hatch of Large Dark Olives start. Upon my arrival I spotted an angler fishing in the first pool I was going to try, so sat back, watched and set up whilst he made his way through the pool.

Admittedly I was a little early, there was the odd Brook Dunn on the water with a few splash rises which indicate fish ‘having a go’ at them. After tackling up and speaking to the angler who turned out to be a friend, Rhodri, I made my way downstream to give us both a fair stretch of fishing ground. Eventually, he moved upstream to catch up with his Dad, who later that day landed a 3lb plus grayling by all accounts!

I sat on the bank waiting and hoping for any fly life to start and the odd trickle of LDO’s started around mid-day. As soon as the duns hit the slower glides the fish were up and feeding, picking them off with a sort of splashy, excited rise. The far side saw a heaven for large fish a deep, slow back eddy with a fast run between to stop any anglers wading over and ‘nymphing’ them out. With the river being so low, the lowest i’ve actually seen it down the bottom end, you could actually reach areas that are usually out of reach. The French leader can usually get to these fish but getting a drift free drag is nae on impossible, and casting a dry there is out of the question.

Today was it easy to get to the far side and with a simple upstream mend make presentation perfect. Working my way along the run, from to bottom to the top, I picked off just two fish on the first run through, covering at least 6 fish. It wasn’t all bad as most fish actually came and either refused the fly or I missed on the strike, so I didn’t feel totally beat! After fishing to the head of the run I spotted a couple of fish further downstream of where I started and which hadn’t seen any pressure. I quick change to a full Dunn pattern, I was using an emerger as it was quite early on, saw an instant change. Even though there wasn’t many fish rising, or a lot of fly life the fish were fully inclined to take a dunn.

Steff arrived just before 3 o’clock, as the hatch was probably reaching it’s peak, with fish going mental in all of the runs. Perfect timing eh!.. I went to meet him from the car park as this was a stretch Steff had yet to fish, and swiftly made our way back down. There where so many fly on the water, just distinguished yours was a challenge, what hope had the fish? With two or three fish in small run, you’d expect one to have a go, but there was so much food there your fly literally had no chance of being in the fishes path. You could watch the fish moving back and forth in the slower run, choosing wisely its next target.

throughout the heat of the hatch, we didn’t actually land many fish, just the odd one or two, whereas we expected many. As the hatch died down and the kamakazie fish slowed down on the feed, the better fish popped up and started to show more frequently. Those ‘far side’ fish I mentioned earlier were on the move, you could tell by their mystic sort of appearance, just dimpling in the surface not actually showing their true size.

We fished for the next few hours targeting these fish, not moving far, only 50 yards between us! Throughout these hours most of the fish we took were over two pounds in weight with nothing smaller, weird huh? A red letter day you may call it, but for the amount of time we spent just fishing for these larger trout, we were highly rewarded. These fish are normally rendered hard, as most anglers have a few casts, change fly a few times and if ignored, move onto the next one. We were stubborn, and sat it out until they fed well and built their confidence, a great tactic if you know their going to take.

My last fish of the day proved to be a tough one, i tried for it three or four times throughout the day, only to put it down with bad casting/presentation or with the wrong flies and drift. It was at the far bank with a deep, fast run between. The only possible way I could catch this fish was to wade out and wait in the run, which was over my waist in depth, until it came back on the feed. I waited for around 20 minutes until I seen its dimple again, not even phased by the three others Steff managed to net whilst i was waiting. But it was worth it. All 73CM and probably five pounds of it. The 9ft 3/4 weight Airflo Streamtec Nano fly rod really stood up to the test! 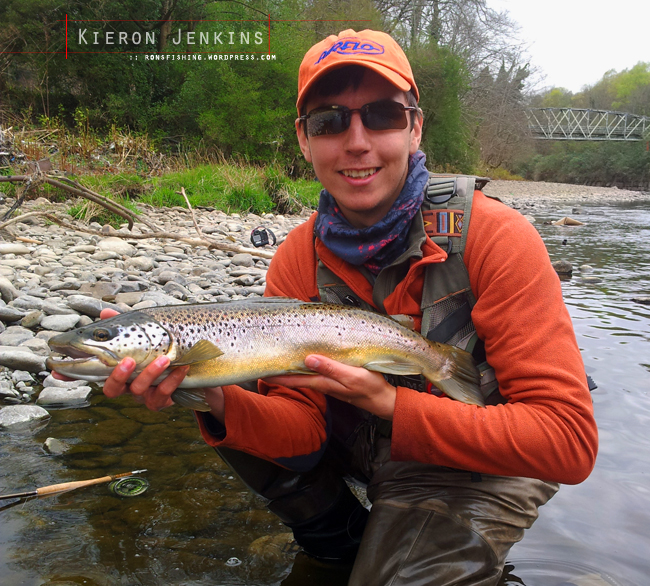 One thought on “A weekend on the Taff”