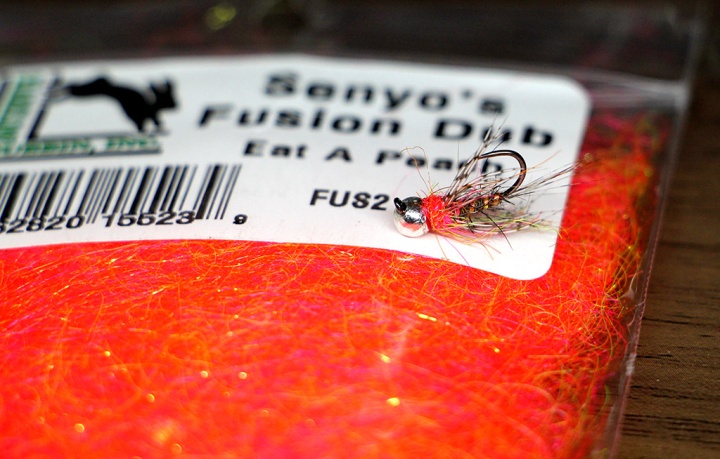 Any angler who fishes for Grayling all have one thing in common, they’re not shy to lather their flies in the brightest, most offensive colours known to man! It’s all becuase Grayling simply love a bit (or a lot) of colour. Shrimps, pheasant tails and even dry flies nowadays are covered in pinks and oranges, be it a tail, a body or a thorax.

When I was last at the Funky Fly Tying HQ, I was instantly drawn to the new range of Senyor’s Fusion Dub, a soft, synthetic material which has much shorter fibres that it’s sister product, Lazer Dub. To the touch, it feels much the same as the be-loved SLF Dubbing, but with an extra pearl strand that really sets the brighter colours off – a trigger point, maybe? And the colour range is simply outstanding for Grayling lovers, pinks, blues, orange, purples, olives and browns… Need I say more?

As soon as I got back to the tying desk I set about tying a range of Fusion dub patterns, with much of the focus being on the ‘Eat a Peach’ colour – A mix of orange, pink a pearl, a Grayling favourite indeed.

I was most drawn to one pattern in particular, an adaption of the ever effective Hare’s Ear, but with a two full twist of Fusion dub at the thorax, and an orange pearl rib. The fly is subtle enough in colour to be fished for pressured fish in clear water, as well as fish that haven’t seen a fly for week. The soft nature of the material allows you to pull the fibres out with a dubbing brush, slightly changing the colour of the whole fly, rather than solid ‘lump’ of colour at the head… A fly that will produce many lovely Grayling, for sure.