I must be honest, Fishing the last few weekends has been great. I’ve been out, getting as much fishing in as one can!

Two days on the river a week ago, Fishing the Cynon with Fishstalker and creator of www.taffdiaries.wordpress.com, and also the Wye with friends and team members of the World Youth Team which were going to Italy a week Friday.

The Wye was hard, strong downstream wind, cold, and rainy. Perfect for the dry fly! Not. The dry fly was our chosen method for each member, as it looks like mostly dry fly fishing in Italy. Considering the conditions, we did catch a few fish. Personally I had around 5-6 Grayling throughout the day, picking the odd one off on the dry sedge when the wind eased enough to see a rise!

This weekend The Nymphos’ spent 3 Days on Llyn Brenig, Practising Friday and Saturday for the Welsh Final on the Sunday. After a good, but Tough days fishing, We managed to get through to the Grand Final In Rutland, along with the Welsh Hawks (1st) and Llanilla aa (2nd). Bring on Rutters!

My beads have arrived… Atlast! – Just kitted out my Wheatley hook pallet, (with beads!) Looks pretty good for the moment! Although Mr BEADS Bromwell has already claimed around 300 of them (yes all packed and ready to bring down for you!) Will be sitting down in the next few days to knock a few flies out, Watch this space.

Just to keep you interested I’ve attached one of my favourite step by steps of the Split Wing Olive. Hopefully it hasn’t been repeated too much! As I’ve Posted it in a few places recently. Hope you enjoy!

This method of tying the wings can be applied to any upwing fly. When the Olive (or other upwing fly) just hatches it’s at its most venerable stage of its living life. As the olive hatches out of its shuck, its wings are wet, forcing the olive to stay on the surface until its wings have dried out and are light enough to fly. If you ever catch an olive that has just hatched, its wings are spread out in a ‘V’ Shape, making them easier to dry off and enabling them to become airborne. The profile of the V shaped wings show perfectly from beneath and the fish seem to recognise this as being an easy target.

Set a hook in the vice, something suitable, such as a light dry fly hook. Here I have used a Partridge SLD, size 16, and run the thread down to the back end of the hook. For the tail, tie in four strands of CDL, something durable. I like to use the CDL as a tail as its very realistic, comes in many different shades, although it is classed as light medium and dark on the packet.

For this fly, I will split the tail so it gives a very realistic resemblance of an olive, and a good footprint to hold the fly up on the surface. Take a piece of thread and loop around bend of the hook and hold the two ends together. Separate the tails by pushing your finger nail, scissors or whatever comes to hand up against the underneath of the tail, this will push them up hopefully separating each one making it easier to pull the thread through.

To split the tail into two – bring the thread up between the four strands, two on each side, and lie on top of hook shank. Make a loose wrap of thread to secure the piece just pulled through. Pull the thread used to split the tail to tighten it and splay the tails at different angles, tighter it is the bigger the angle.

This method of splitting the tails is my favourite; there are many ways of doing it. This is quite simple and easy as it doesn’t tend to trap any of the tails and keeps them on top of the hook. 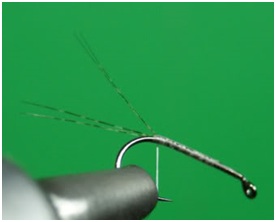 Tie in one strand of the Turkey biot by its tip and wind half way up the hook shank and tie off. To make sure you get the correct side of the biot showing, tie the biot in with the piece thats curled (the part that is left by stalk that it’s been pulled from) facing downwards.

Tie in a piece of black aero dry to be used as a thorax cover and to also split the CDC to create wings. This could be substituted with anything really.. More cdc, black floss you name it…

Take 3 CDC feathers – pull off each side of the feather and place on a flat surface so it doesn’t get damaged or blown away. 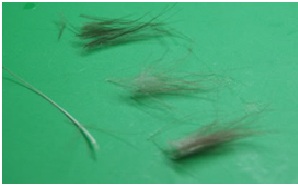 Take one of the ‘bundles’ of cdc, cut any unwanted stalk off the ends and tie in with just a few wraps of silk, Repeat this process three times, each time leaving a small gap between each wing. 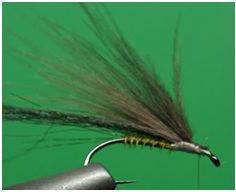 Try and keep the CDC on the top of the hook, as you want the wings to sit up, not flat on the water.

To cover up the unsightly thread which is trapping the wings in, dub a small amount of Olive opossum onto the thread (could use anything with the same colour as the body)

By “figure of eightin” the dubbing around the underneath of the fly, going behind and in front of the wings, the thorax should now be created and it should also look much more pleasing.

Now to the wings, once you have created a neat thorax,  pull the aero dry forward evenly between the bundles of CDC. This should split the CDC pretty evenly and the thorax should lie perfect in the correct position. Then tie off.

To shape the wings, take the two between your fingers and squeeze flat. Judge the size accordingly to what insect your representing, and cut around the shape of your fingers. This should then leave a rounded set of wings pretty close to the size and shape of the fly your tying. 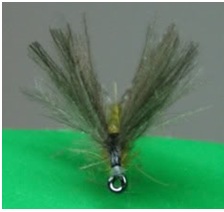 Whilst dry fly fishing, one of the main reasons a fish is missed or bulges beneath the fly is normally thought because the fly is too big, but in past experience most of the time it comes down to the leader. Your leader choice is just as crucial as you’re presentation.

A light tippet will always present a fly much better than heavier tippet. This is because heavier tipper is usually stiffer than the lighter stuff and causes the fly to drag across the surface, making the fly less realistic. Fluorocarbon is heavy. It sinks beneath the surface resulting in two things. It causes the fly to be submerged and water logged, although sometimes this can be good, accidently fishing in the surface film can result in more confident takes, it’s not what you’re trying to aim for with dry flies.

Alternatively the nylon used is co-polymer because of its properties. It is very subtle, and allows the fly to float freely downstream. Co-polymer also floats, which allows the fly to sit high in the water, as if it was a real dun you’re trying to imitate.