It seems that Saturday most anglers around the UK headed to the water in search of their first fish of 2013. I was lucky enough to head to the Wye – at a fairly disclosed location –  in search of a few lumpy grayling I heard inhabit the stretch this time of year. The water is of what grayling fishers dream of; long, gravely glides with the added excitement of a turbulent run at the head of the pool. Although a relatively short section of river it has plenty of character and features which corrupt an anglers mind for the entire day.

With the rain actually easing off after the Christmas and New Year period, the weather showed a very inviting ‘break’ towards the end of last week, as anglers, we just have to get out!

We called into Fishtec in Brecon so Terry could stock up on much-needed fly fishing tackle, of which consisted of a new fishing jacket, some G3 nylon for heavy nymphing, and a new Streamtec rod paired with a beautiful 3/4 V-Lite reel. Now, Terry armed with some new tackle, it was time to break the 2013 ‘duck’ and actually catch a fish.

The river looked in ideal condition, dropping down and refining nicely from an extensive spate period! On the Wye and Usk webcams the night before the river looked more or less un-fishable with most of the stations below Builth Wells showing the river above each measuring stick! But to our amazement the river was fishable and looked in pristine condition. It’s been a while since we’d seen a river  low enough to fish!

We stepped into the first pool, Terry making his way to the middle of the run whilst Jonathan and I moved to the top of the run, within a few casts I’d hooked into a decent brown trout of around 12 inches in length. A plump fish for this time of year which fell foul to a pink Czech nymph. It became immediate to me that my setup wasn’t getting down. I get these little inclines every now and again which completely throw me off my stride until I’ve changed method or fly or location. I knew the flies catch fish and my location was perfect, so in my mind it had the be my leader setup.

I set-up at the start of the day with a French Leader, a fairly long tippet of around eight feet in length with two flies strewn to the cast. The river was pushing around 6-8″ of water, so the extra length and heavy flies were destined to reach the bottom, right? Wrong. The leader length hindered the sink rate of the flies as it was caught up in the turbulence, a bit like drag when dry-fly fishing, but under the surface. The obvious thing to do would be to add more weight to the cast, enlarging the bead or the amount of lead in the flies, but a fly with too much weight would catch on the bottom and not ‘roll’ freely along the river bed, looking unnatural to the fish.

I decided to take the French Leader off and revert back to good ol’ Czech Nymphing with a fly line. I always wonder why angler who struggle through the winter on larger rivers still fish the French Leader. It’s a method which has been designed to fish light flies at farther distances. Most only use two flies, even though you can add weight you still have the problem with the extra length of leader getting caught up in the current. There’s no real substitute than a short leader with three heavy flies to get down and dirty to where the grayling are feeding. This time of year, it’s usually hard on the bottom.

The last few weekends fishing have actually proved my theory, and now after seeing it for himself,  Terry can see where im coming from, although he didn’t notice the first one or two days out 😛 We’ve fished pool after pool on both the Taff and the Rhymney, one with the usual French Leader setup,  and the other with a Czech Nymph setup. Our catch rates varied in more ways than one. Most days I’d fish the Czech nymph setup – just to prove a point to Terry –  that his flies were in fact not hitting the bottom or fishing in the right place . He’d end up with one or two fish, and what he was catching were mainly browns, when I would get 6-7 grayling. It happened the same on the Wye this particular time out. My first run through the top of the pool saw 4 fish hit the net, a brown (caught using the french leader) and three grayling on the Czech nymph setup. Terry and Jonathan both fished the french leader with no success on equally as fishy-looking water.

The day quickly fizzled out and it was about time to leave, Jonathan still fish-less and Terry managing his first two fish of the new year, the first shown below. As I was tackling down on the bank and looking through a few images I took through the day, Jons indicator shot forward and he stuck into his first of 2013. 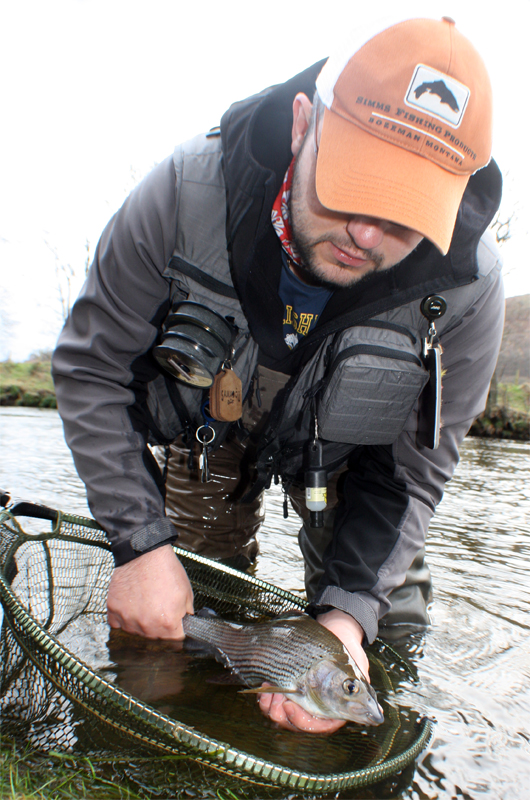 The Czech Nymph setup took 7 fish that day to the 3 taken by the ‘French Nymphers’. It’s becoming to obvious, not only in my eyes, but in eyes of good anglers all around the UK that the French Leader technique doesn’t ‘fit the bill’ when it comes to heavy nymphing in high water. You REALLY need the extra weight of that third fly to tighten everything up on the cast and drop the flies to where the fish are feeding.