Draycote Water is one of my most favourite lakes to fish, when I was younger we used to venture to Draycote a couple of times a year with the Thorn fly fishing club, but since then I haven’t really spent the time on there. I had a great day with Lloyd back in 2011 – You may be interested in this blog post – and I mentioned to Terry that there was a spare space going on one of the boats. Being mainly a river angler with the odd jaunt to the small-waters, Terry jumped at the idea of a days boat fishing, even if he was out of his comfort zone.

I picked him up at 5:30am and we made our way along the M4 corridor towards the M5 where we’d more or less get taken straight into Coventry. 150 miles later we arrived at The Green Man Pub, Dunchurch for breakfast. A fine breakfast to settle the stomach for a long day on the boat. Ring up and book your place if you need somewhere for breakfast.

Arriving at the lake at just after 9 we were greeted by Craig and the team of rangers, we paid for our boat and tackled up our fishing gear whilst sat at the jetty. I talked Terry through a few of the usual searching methods, we know it wasn’t going to be that tough with 8000 recently introduced stockies, but he was armed with the knowledge and the correct fly lines. He decided to set up with an Airflo Di 3 Sweep on his favourite enigma EMG rod, something he’s become very fond of the last couple of trips on the small-water! I decided to drop a little deeper than Terry, opting for the Di5 Forty Plus and more or less the same cast. We had the vision of searching for older fish later on in the day but wanted to get a couple of fish in the boat…

As I threw the drogue out to set the boat, Terry’s flies were already airborne and were hurtling towards the horizon. Before I could pick up my rod to make my first cast of the day he’d already struck into his first fish! He mentioned he’d counted to 10 seconds and half way through the retrieve the line locked up, a typical pulling take! In no time the fish was near the boat and you could see the look of enjoyment on Terry’s face. As it broke the surface I could see it wasn’t a stocky after all, but a fully finned, overwintered rainbow which looks as if it should have come from the top of the North at Rutland! Minus the cormorant mark of course… 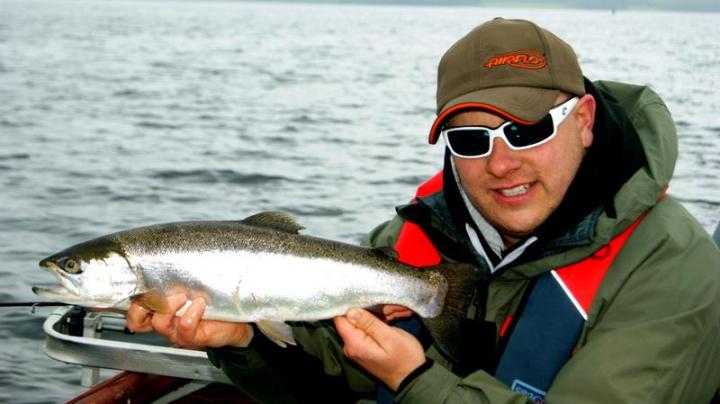 It wasn’t long before he had another in the boat – I think he has a special knack for this fishing lark – And before long he had the net posed ready for action. The first two fish fell to the black and green blob on the point. Something I had readily tied on in anticipation. This time, the fish was not as beautiful as the first, but a worthy trout none the least. 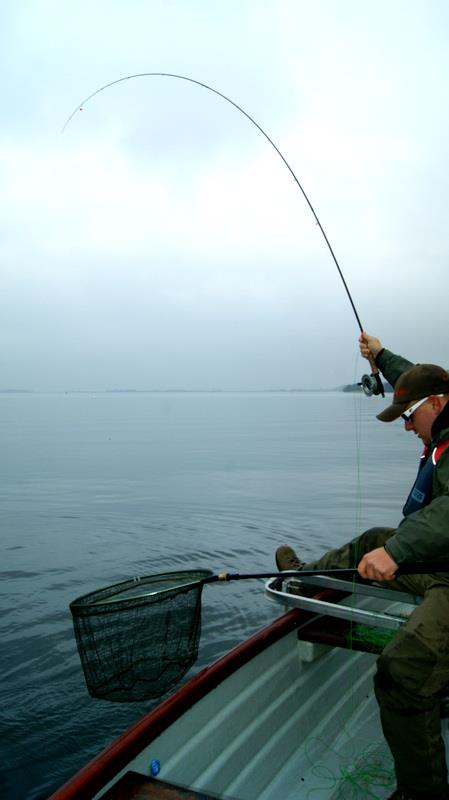 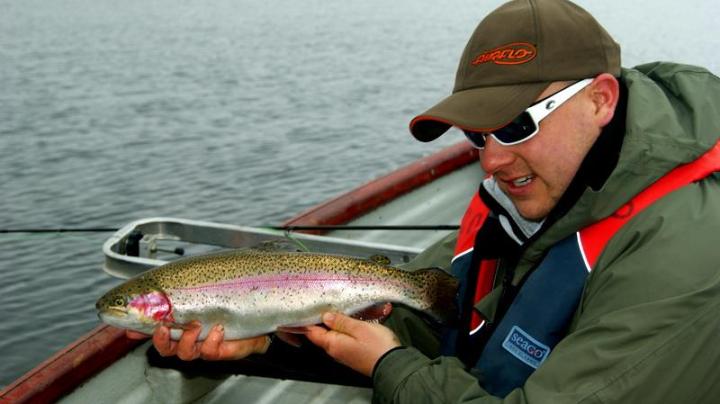 It wasn’t long before my line started to go tight too, fortunately, otherwise I’d be on the bad end of a stuffing! Just as Terry slipped that fish back, I was awaiting the net to land my first fish of the session. A nice, clean stocked fish which put up a great account for itself. The trout had congregated around the ‘kink’ half way along the dam wall, outside the jetty. A quiet piece of water just on the inside of the corner. Each cast for the next 10 minutes I either took fish or bumped them, managing to put another 7 in the boat in just as many casts. Each were ‘peas in a pod’, averaging around 2.4lbs.

The Di 5 seemed to be out-fishing the Sweep 3, so I mentioned to Terry that he could leave the line sink to around 20 seconds rather than the 10 he was letting, by the end of the drift Terry took another four fish. Bringing his total back to 6… A great first drift, especially for a first time boat angler. As I started the engine and turned to return for another drift, we were greeted with an abundance of boats which seemed to pop up from nowhere, so I decided to take a look at the top end of Tofts Shallows, hopefully for some buzzer feeders, but mainly anything that came along!

The drift I chose was free from boats with just the one boat anchored in the far corner. Again, as I set the boat, Terry launched a line out and managed to hook another fish, fairly close to the surface. At that time I opted to swap from the Di5 to a 3ft Airflo Mini tip and a team of four buzzers. Terry landed the fish and was astound to the amount of insects, still alive in it’s mouth. A great time to go on the buzzers?

I strung together a cast of 4 glues, spaced fairly evenly apart at around 4 feet intervals. On the first cast Terry asked how he would fish this method, I explained in short hand, throw about half the line as it’s easier to control, give the flies a couple of seconds under slack line so they fall that little bit quicker and tighten up with a slow figure of eight. Keeping the line straight and under control throughout the whole retrieve. And then the deadly ‘lift’ at the end of course. It was so textbook, just as I mentioned lifting the rod at the end to pull the buzzers slowly to the surface, the rod buckled over and I struck into the first fish on the buzzers. Taking the point fly, a bright orange buzzer tied on a Kamasan B110 and glued a few times, the fly had weight and colour to attract fish, a great fly for stocked fish when they want it slow. 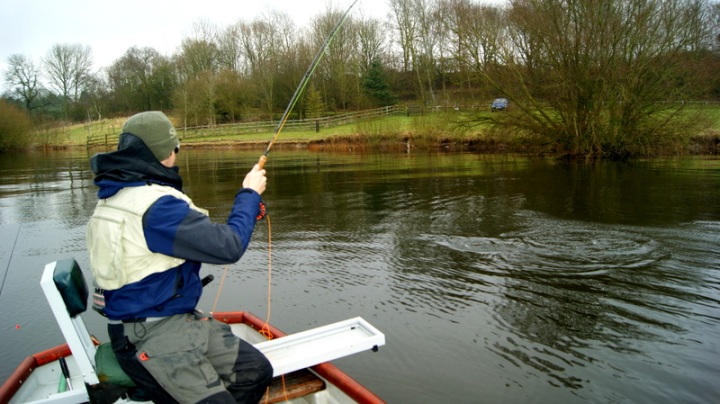 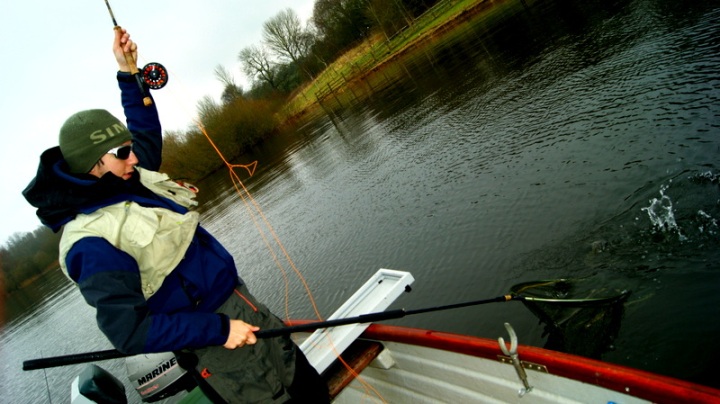 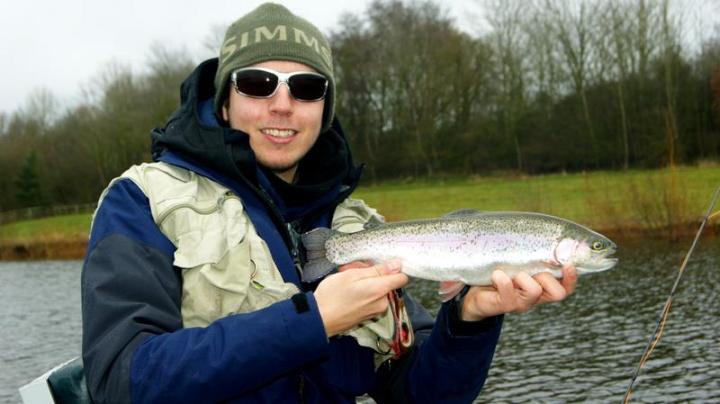 Later on that drift I couldn’t seem to get much going, but Terry took a couple more fish on the di3 Sweep again fairly high in the water. I thought the fish couldn’t be that deep for him to be taking them mid cast, it can’t be much more than 5/6ft down in the calm water and 20 second drop. I decided to change the make-up of the cast, taking the heavy fly off the point and positioning it on the 3rd dropper down with a slim blob on the point. I hoped the heavy buzzer would pull the blob down deeper but also not so deep as the cast before. With a 3ft mini tip fly line I was hoping to position my flies all within around 6-10ft mark, fairly close to the bottom in this shallow water. In no time I was rewarded with another feisty stocky, and it was from there on the fishing got good, the weather warmed up a little and we put at least 50 fish in the boat! 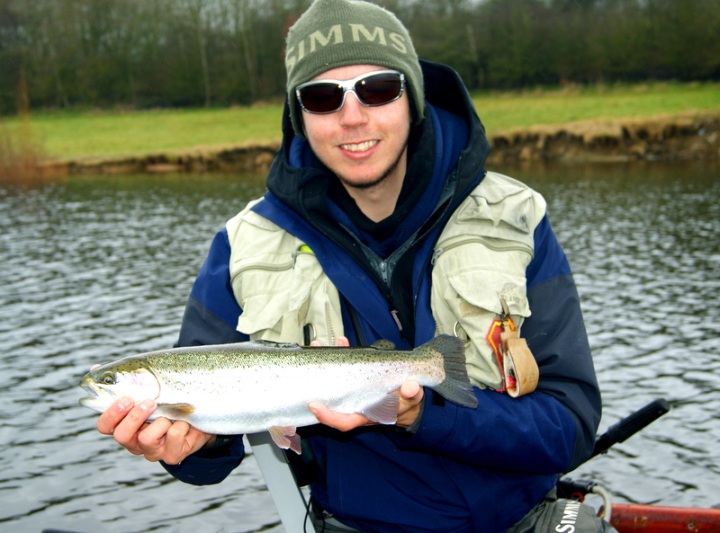 The highlight of my day, however, was getting a chase of over 15 yards from a decent rainbow. After spotting a fish rise close to the shore and lengthening my usual cast to around 30 yards in length, I was lucky enough to tempt the fish into casing the blob on the first pull… As I kept pulling the line eventually locked up and all hell broke loose when the fish below decided to run me to my backing. A recently introduced fish again, but one of the best fights we had all day. Weighing in at over 7lb. 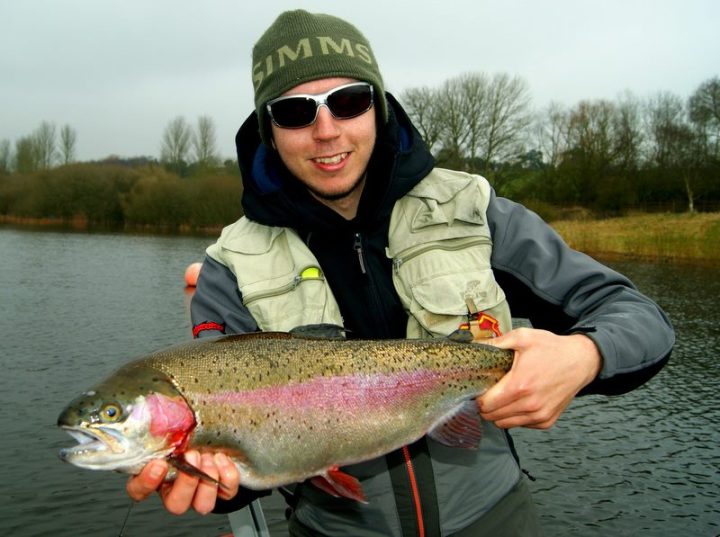 Terry however, managed to take ALL the better fish of the day – im sure its beginners luck – netting five perfect overwintered fish throughout the day. Some of them were immense, great fighters and beautiful fish. What other way would you want to start your boat fishing career, Terry? 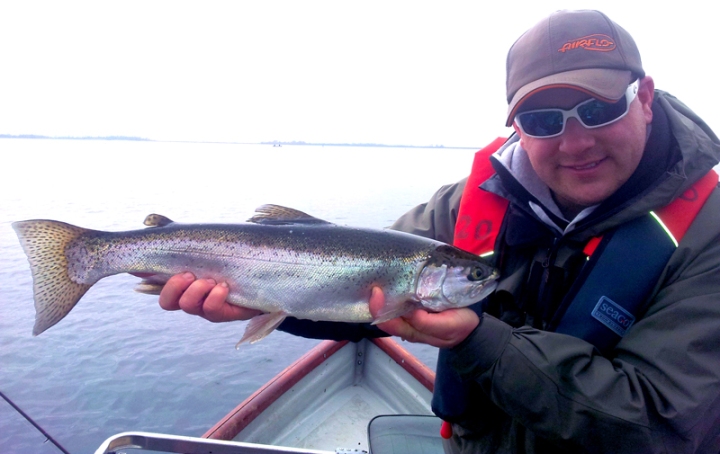 2 thoughts on “Opening weekend at Draycote”