For the thirds consecutive year I’ve been lucky enough to be part of the Welsh international team which has won Gold at the rivers championship – And each one feels better than the last.

Fishing for your country is a pleasure and being part of such a strong team has its perks, you always learn of each other and watch how other anglers fish and approach a water – Which is what being in a team is about.

At dinner time, Wales were leading the field by 2 place points and we all went into the third session with renewed confidence. After dropping 4 place points in the third session, England were ahead going into the 4th session. But after a good last session for Wales we brought the score to a level playing field. The final score went on the accumulated number of fish points and we came out n top by just 8 points! That’s 8cm in length overall! An extremely close match, too close for my liking! For more of a report see here : Rivers International Report

Anyway, that’s enough about the scoring, lets move onto the fishing. When we fished the river Ure first of all the water was high, coloured and frankly awesome; we caught plenty of fish on all sorts of methods, with many fish being caught on dry flies in the slack water. When we arrived just a week before the match, the Ure was a totally different river. On it’s bones and still dropping throughout the week. As comp day approached much of the water was either dead slow – just like a still-water – and just a trickle at the head of the run. 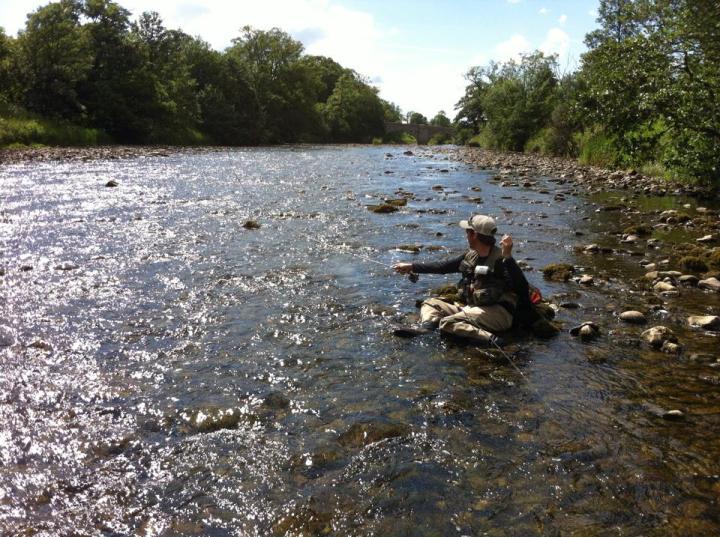 Dries and nymphs was certainly the way to go, with many small grayling and decent trout occupying the middle of the the runs. As a team we put all our eggs in one basket and set out with one fly rod solely for dry fly fishing and the other, for a single nymph technique. My best nymph throughout the whole week had to be CDC Red tag and the Olive blob tail nymph. The Olive nymph also worked well with a bright orange bead – I must thank Toby at Funky Fly Tying for sending up a load of beads the day before the match – Saved our Ass!

For me, the competition was fairly tough, with some decent anglers in my group, and many lost fish, I managed a respectable 7th place position – Taking a 1st, 3rd, 4th and a 1st position in the four sessions. It didn’t help being drawn a mile away from the fish in the second half of the day, and having to hike back up stream to where the majority of the fish were!

As a team we fished extermely well together and I for one am extremely proud of each angler.

Next competition for me is the Lexus team comp and then the rivers trial the day after! Wish me luck 🙂

One thought on “Rivers International 2014”