The Taff on Saturday was pretty high and coloured, it had that grey, horrid.. dusty looking colour, presumably off the roads from the storm drains… and then that pale brown colouration once the loose dirty and mud had been washed downstream – Although, with no rain through the day the river was almsot clear by the end.

The three amigos where on the river again, Myself, Dad-Bushy and Terry ‘beads’ Bromwell. As we approached the river the thought of, jesus, its pretty low! came to mind. After all this rain we thought it would have been up some! So after a few flicks to test the water, (nothing bitting) we realised we hadn’t actually come to the Taff as yet! Just kidding.

We headed down to the river, Just above a small village called Troed-y-rhyw. We walked maybe a mile from Abercanaied – expecting the pools and making a mental note where we thought any fish would be lying up. Looking for the likely spots and every new crease or pocket formed by the extra few inches gained by the rain.

We offered the guest the first pop at the action, so ‘Beads’ jumped into the red brick pool – within about 5 mins of fishing the ever colouring river produced a cracking trout. 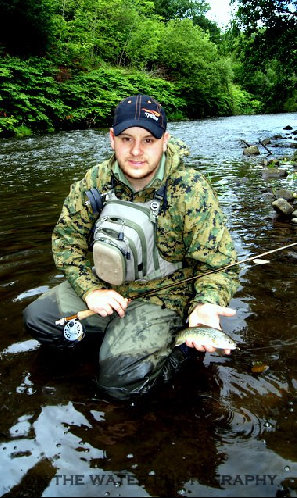 We headed up stream, fishing the pools, runs and glides with several different methods from Dries to the French Leader. Bringing some cracking fish to hand, although nothing big, but some great scraps from wild and stocked fish.

We came across some rising near the top of the streach we were fishing. After sitting and watching them for about 10 minutes, waiting for Bushy to tackle up his rod with the pheonex silk like, finest of tippet and one of his best hand tied olive patterns we entered the water as a three sum, watching intentivly as Bushy made the first cast over one of the 4 rising fish. They were regularly taking fly, olive duns,  but as soon as they could tell something was up… leader was too short! they were off.

With some careful tinkering of the leader set up we were back in action with Bushy covering and taking a fish first cast.

Only taking a few on dries we progressed upstream, by now the river was back to it’s normal state and the fishing had seemed to picked up.. taking a few fish on the nymphs towards teh end of the day.

One thought on “Fishing post Number one – The River Taff”