The recent high water had knocked fishing on the head the last few weekends, forcing us to stay indoors or fish relatively heavy bugs in the margin looking at a swollen river. Sunday morning the river had dropped lower than it has been for a while, dropping around3 inches overnight this left many unfishable areas, fishable letting flies trundle in runs which haven’t been fished in weeks.

The larger Taff specimen seem to be pretty elusive this year, but with good numbers of small ladies being produced. Trout on the other hand, is immense. Every pool you get into seems to be littered with trout, older, triploid stockies from the previous year. I set about on the grayling quest again yesterday, searching the river with Terry Bromwell and Bushy.

Our start was hindered somewhat looking for a lighter. It may sound daft, but  lighter which was in someones hand, disappeared for around 30 minutes, it seemed to be almost as elusive as the large grayling.

A short walk to the bottom of the beat, we tackled up and entered the river. My first run through a head of a run produced 5 fish, 2 grayling 2 browns and a sewin. Nothing really of any size except a trout of around 3/4 of a pound.

I moved out of the run to go and speak to Terry, where he bent into good trout on a small jig nymph. The fish fought well and put up a great account for itself being in near perfect condition. Check out the high watermark!! 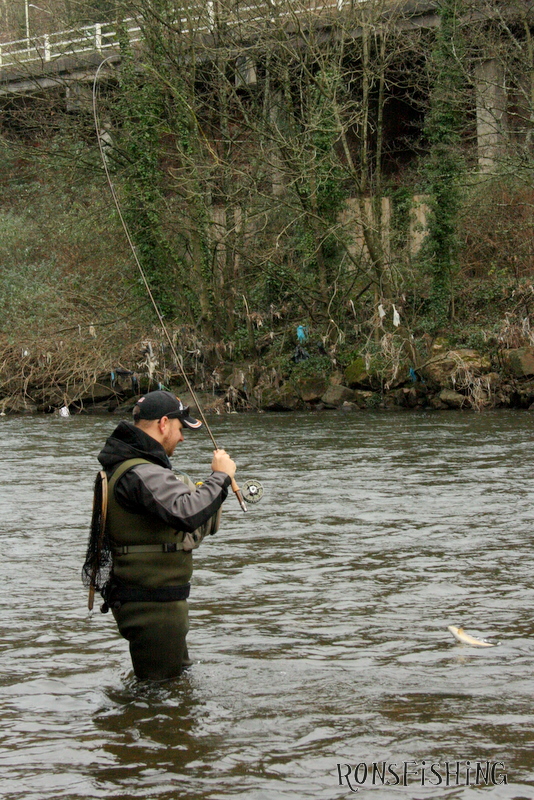 We carried on upstream, working the edges and crease of the fast water. It was pretty hard going considering the river was in great condition. It was nice to see though, searching areas which have been scoured out and filled in by loose gravel.

The fishing itself was odd, if the water was over your knees, catch rate would drop considerably, even in the slower moving water where flies can be easily fished and controlled. It’s as if the trout and grayling both know the cormorants can’t get them as easy in the shallower water.

We French nymphed the remained of the pools picking up a few more grayling in the slacks behind a few boulders.

When were on the river we try and keep our flies quite subtle, dark and slim. The bigger grayling seemed to prefer these than the usual large pink bugs. As you would have guessed, Taff grayling see hell of a lot of pink bugs as its quite heavily fished.

But today I thought these are young grayling, Fish hat haven’t seen that many brightly coloured flies or anglers in fact. I swapped my usual choices for two lightweight pink bugs which would fall at a comfortable speed hoping the be picked up by the grayling.

The trick worked! I landed around 10 grayling in the last two hours, but still nothing over a pound. At least the brownies stayed away, their what I’ll be chasing in around 7 weeks, if the water stays low enough to get in!

Time was ticking on, the light was fading but the fish where still pulling back, but for Terry, trees where is main problem.

This weekend is looking ever more promising to get out, hopefully the water will be back to around normal!

One thought on “Taffing about”