The trout season is just around the corner and many anglers are dusting off their fishing kit, finishing a few much needed start of the season flies and stretching their fly lines. Throughout the winter I like to keep in touch with lake fishing by heading to small-waters like Garnffrwyd and some larger water such as Farmoor, both offer great pleasure fishing, just what you need with a year of competitive angling ahead. Each offer a different type of approach, Farmoor being deep and smaller lakes relatively shallow. The different depths keep you on your toes when the fish change their feeding habits, adapting your method or moving areas keeps the mind working and searching for the next take.

Over the weekend I’d caught wind that the Welsh Youth Team were heading to Garnffrwyd for a pre-season get together, not only for the fishing but a much needed team bonding session to get to know each-other.  As I arrived home from the river Saturday afternoon I was greeted with post after post of large fish on Facebook! Great to see anglers aged between 12-17 slipping the net under a fish of a lifetime, showing off their prize catch, some with fish up to 13lbs!

After being teased by the fish on-line, Terry, Bushy and I decided to take a look for ourselves, not expecting the same sort of fishing but it’s always worth a shot! Overnight the temperature dropped to below freezing, clogging up half the lake – my favourite half unfortunately – with ice. The water was quite cloudy, visibility at only three feet but the fish were still pretty high in the water considering the temperatures and a lot could be seen in open water. Cruising at around two to three feet, the ghostly like shapes were moving very slowly, almost lethargically, and my usual line of attack seemed the way forward.

I tackled up with a ten foot long leader of 8lb fluorocarbon, a fast intermediate fly line with a UV damsel attached to the leader via a rapala knot. Stripping the lure it was obvious the fish were interested but it seemed after the initial chase that was it. Fun as it was to get a fish follow and nearly eat the fly, those did never turn into fish in the net, it seemed they wanted it at their level and not moved very quickly, something they could eat without using too much energy. Using the figure of eight retrieve the fly dropped too deep into the murkyness below the fish, totally invisible to the targeted prey. Don’t get me wrong, there could have been fish below these; in fact there probably was, but at least for now the fish were there and willing. First cast using the roly-poly method the line locked up but unfortunately become free as the fish let go …Another cast into the sam place and this time it locked up solid, with my first feisty rainbow of the day.

Once the retrieve had been worked out it wasn’t long until I managed to net three or four fish, they seemed to want it at the specific depth just as the head of the fly line was coming through the rings. Check the image above where the orange hang marker comes into hand, that’s where the fish were hitting just as the line dropped to around two feet in depth.

I looked over to Terry and Bushy, both had set-up with a trio style method, not the usual ‘bung’ because they seemed to be using river flies! A stimulator, buzzer (ok, not so river) and a pink shrimp on the point, spread out within five feet of line anchoring the shrimp near the bottom and the buzzer a couple of feet below the surface. Half an hour into the day and Terry’s indicator shot under and his rod doubled over. A nice brown jumped clear of the water, lean but full of power and starting to pack on the pounds after a long winter. 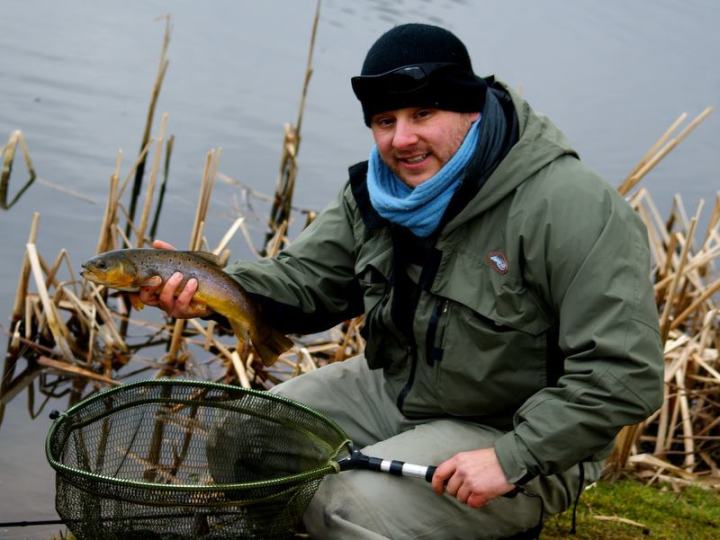 As we returned this beautiful fish Lewis Rumble turned up at the fishing hut and started to tackle up. It’s was inevitable that he fish the previous day and came down with almost exactly the same set-up as I had, fast glass line with a black and yellow dancer. Just as he come down he made himself useful and netted a fish which had taken the olive damsel, in a place where some fresh, clear water enters the lake. 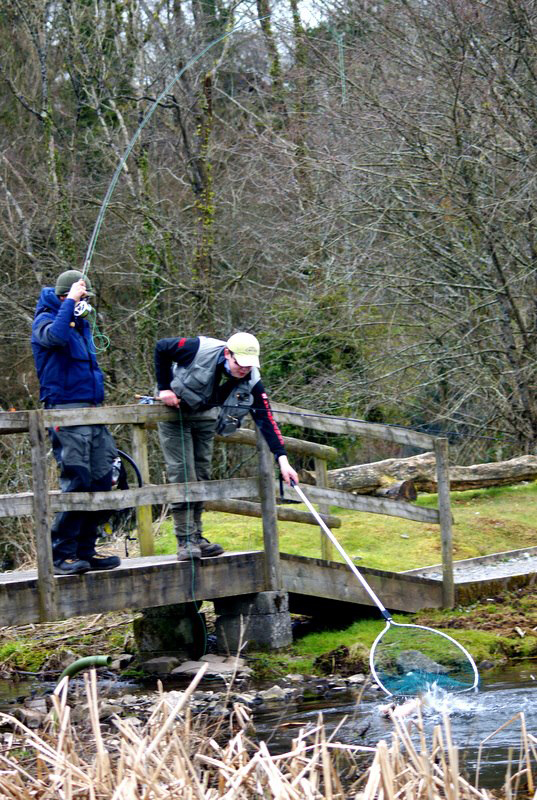 As the day grew on the the fish didn’t really come on, the cold weather had settled in and wasn’t going to shift. The wind became stronger and really took hold of your hands, it was at that point that releasing fish became painful and retrieving the fly line with no sensation wasn’t really that fun. So it was then we decided to call it a day, not surprising at 16.45!